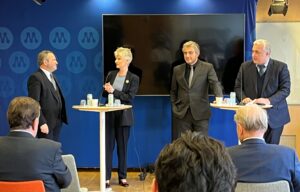 The three representatives of the Georgian civil society visiting Stockholm gave their first-hand experience of the situation in Georgia. The main focus was the deepening polarization, deteriorating health condition of former President Saakashvili and the decreased media freedom.

The Jarl Hjalmarson Foundation publishes a 2023 calendar with pictures from the Swedish election campaign 2022. Representatives from our sister parties visited during august and september to learn more about the elections and to be part of the campaign activities all over the country.

Why sanctions on Russia are working

The Jarl Hjalmarson Foundation publishes a report on sanctions towards Russia. The report is written by the Russian opposition politician Vladimir Milov.

In the report, Why sanctions on Russia are working, Mr. Milov states that patience is needed in order for western sanctions to have the best possible impact. The Russian economy is slowly but surely collapsing, and even though Putin’s temporary trade with countries such as Turkey, China, India and in Central Asian are helping Russia to circumvent the western sanctions at the moment, it will not be able to save the economy in the long run.

To read the report, please use the following link:
https://www.hjalmarsonstiftelsen.se/wp-content/uploads/Milov-Sanctions-on-Russia-are-working..pdf

The Václav Havel Human Rights Prize is awarded each year by PACE, in partnership with the Václav Havel Library and the Charta 77 Foundation, “to honour outstanding civil society action in defence of human rights in Europe and beyond”.

The 60,000-euro prize was presented at a special ceremony on the opening day of the autumn plenary session of the Parliamentary Assembly of the Council of Europe (PACE) in Strasbourg.

Vladimir Kara-Murza who has been a consistent critic of the Russian government, and co-founder of the Russian Anti-War Committee established to oppose Vladimir Putin’s invasion of Ukraine was awarded with the prize.

Presenting the award, PACE President Tiny Kox, who chaired the selection panel, said: “Despite the risks, Vladimir Kara-Murza had the courage to return to his country to continue his fight, even while having the possibility to stay safe. It takes incredible courage in today’s Russia to stand against the power in place. Today, Mr Kara-Murza is showing this courage, from his prison cell.”

The Moderate party’s opposition leader Ulf Kristersson claimed victory Wednesday evening in Sweden’s general election after three days of vote counting resulted in a narrow three-seat advantage for his side.

“We have an election result, we have the mandate for change we asked for,” Moderate Party leader Kristersson said as the result was announced. “I will now begin the process of forming a new government for Sweden and all its citizens.”

Outgoing premier Magdalena Andersson conceded defeat. She said she would resign as prime minister on Thursday, but remain leader of the Social Democrats in opposition.

Ulf Kristersson now faces a fresh challenge to stitch together a functioning government from the disparate group of allies that back him to lead Sweden.

Some days ago, the leader of UCP party in Belarus Mikalai Kazlou was once again detained in Belarus. This time the former UCP vice chair Antanina Kavaliova and the regional chair of UCP in the Minsk region Aksana Alyakseeva, were detained together with him.

This follows months of increased repression and brutal handling of the democratic forces in the country, a development that has increased severely since the Russian invasion of Ukraine in February.

The UCP Political Council considers the detentions and arrests “a gross violation of the current constitution and calls this a campaign to intimidate party members and supporters” in the oldest dictatorship in Europe.

Furthermore, the UCP political council calls on the sister parties from EPP to campaign in solidarity with the detained, arrested and convicted leaders and activists of the UCP.

Yesterday, the ambassador of Ukraine in Sweden, Mr. Andrii Plakhotniuk, was awarded the Royal Order of the Polar Star. In a decree issued by His Majesty The King, Plakhotniuk was appointed Commander 1st Class of the order. It is common that an ambassador receives the order from the King at the end of the diplomatic tenure in Stockholm. However, by awarding the Ukrainian ambassador the royal order at this point, Sweden shows in a unique move its support for the Ukrainian fight for peace and freedom.  The order was handed to Andrii Plakhotniuk by the foreign minister in a small ceremony at the ministry of foreign affairs.

Ilya Yashin, former leader of the Russian liberal party PARNAS, has reportedly been detained in Russia. The party PARNAS, now led by former Russian prime minister Michail Kasyanov, is considered one of the most stable actors within the liberal opposition movement in Russia.

One of his aides said that he was charged with disobeying police and insulting them while being detained. However, no explanation has been made on why he was approached by the police in a Moscow park in the first place. He now faces 15 days in Russian prison.

Lithuania Defends Sanctions on Some Goods to Kaliningrad

Two days ago, Lithuania decided to bar rail transit from Russia to a Russian Baltic Sea exclave of goods hit by European Union sanctions, in a move that drew Moscow’s strong anger amid high tensions in the region.

Lithuanian Foreign Minister Gabrielius Landsbergis said Lithuania was simply implementing the sanctions imposed by the EU, of which the country is a member. He said the measures implemented on Saturday were taken after “consultation with the European Commission and under its guidelines.”

This week, the lawyers of Russian opposition leader Alexey Navalny were denied meeting him as as planned since long. Upon their arrival to the penal colony where Navalny has been held for months, Russian authorities explained to the lawyers that Navalny simply was not there, since he had been transferred to a new maximum-security prison.

Questions regarding his whereabouts and health remain unanswered.
In March, Navalny was sentenced to nine years in prison. He was convicted on charges of fraud in a trial that was entirely politically motivated and orchestrated from the Kremlin.